He was a drummer from the womb — usually around midnight. The kicking began with a steady rhythm and quickly accelerated. Boom! Bam! Boom Boom!

I knew he would have some sort of musical talent, and he would be a night person.

So it was no surprise when I handed my toddler son his first drum set – my best pots and pans with a wooden spoon. He took off with his own version of heavy metal percussion.

During the parent-teacher conference in first grade, his teacher gave me that look every parent dreads. “He uses his pencils and sometimes his fingers to beat on his desk.” She sighed heavily.

“Uh-huh. And the problem is?” We started looking for a drum instructor.

After a few lessons, he progressed through all the books, wore out several pairs of drumsticks and one or two instructors. “Definitely a musical prodigy. Definitely has amazing rhythm,” they said.

“Uh-huh.” For his next birthday, we bought him a genuine drum set.

Middle school enrollment meant organizing his schedule around band. Forget biology and algebra. The only reason my son went to school was to be with his friends and be in band.

During a concert highlight, he played a solo that brought a standing ovation. One of the premiere piano teachers in our community told me later, “His rhythm is impeccable. I’ve never heard anything like it.”

During high school, marching band provided the perfect scenario for discipline, music and the opportunity to excel. He won a speed drumming contest, and his band won championships weekend after weekend.

I stood in the stands cheering and pointed out the drumline to everyone who would listen. “That’s my son – on the snare.”

He was asked to play with a small heavy metal band, so they had several gigs all over town and performed at The Battle of the Bands. They practiced out in the country, at the lead guitarist’s home.

Our neighbors were probably grateful, although no one ever complained about the constant beats coming from our house.

He probably could have applied for a music scholarship to college, but he chose to go a different direction. And that was fine — until the brain tumor diagnosis.

When the doctor said he would lose his hearing, everybody started praying. Have you ever prayed your guts out? Uh-huh.

And God was gracious. The first question I asked him in the ICU was, “Can you hear me?” It was a wondrous miracle when he motioned, “Yes.”

Life has continued for my precious son — sometimes filled with joys and other times with challenges. But his drums have always been his sense of identity, his place of belonging.

Until his best friend died. My Caleb joined the drumline to play at Ryan’s funeral. went through a severe bout of survivor guilt and grieved deeply. Then he stopped playing his drums.

For several years now, I have prayed Caleb would return to his music. I knew he missed his drums even though he never said so.

But music does that for us. It solidifies the rhythm of the soul so that when it is gone — we feel empty.

A couple of weeks ago, Caleb and his sweetheart became engaged. Maybe he felt it was time to leave the past behind. Or maybe he just felt like his world was suddenly right.

He ordered an electronic drum set and had fun setting them up, testing for the best sounds, hooking wires to the amplifier and re-arranging his bedroom.

He’s been playing every night. Great therapy after a day’s work, but also a workout. Good for his heart — physically and emotionally.

When I hear the beats, I smile and thank God. I know my son is happy, so that makes me happy.

When we’re happy, when we’re hanging on to hope — that makes our Father God smile. He enjoys the pleasures of his children, just as we humans do.

So during these days of so many challenges, it’s important to find that one thing that brings pleasure.

Whether it’s arranging flowers from the garden, revising an old recipe, playing a musical instrument, connecting hope to your children or writing a blog post — do something that brings you joy.

Then try to imagine God’s smile.

If you’re struggling to write another blog post, maybe you need a plan. Check out Finding Your Writing Plan. 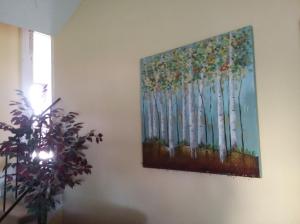 It was a nondescript garage sale with a yard full of items. “We’re blending houses,” the owner said, “so we have to choose only what we’ll need together.”

I didn’t need any of the items in his yard but noticed the painting — mountain aspens with a turquoise background.

Deb would like that, and her birthday’s coming. But does she want another piece of art?

I talked myself out of it and started to drive home. But the Divine Whisper wouldn’t leave me alone. “Go back. You need that painting.”

“It’s probably too expensive,” I argued. But it’s hard to argue against the Divine One. “Okay. At least I can ask about it.” So I turned around and drove back.

The tag on the back noted the original price — $140. But the owner didn’t want it, so we settled on the price — five bucks.

Deb was delighted as we hung it on her wall. It seemed to give off a special aura, a reminder of our mountain travels and the Rockies she loved.

“I hope you got one of your special bargains for this,” she said. “It’s lovely.”

A birthday hug and our usual celebration meal — Mexican with extra guac and chips.

We didn’t know the blended house would never happen, that this was the last time we would party on her special day. A couple of weeks later, she was suddenly struck with hemolytic anemia.

Our goodbye happened in the ICU. “See ya’ later, friend,” I whispered to her closed eyes. “I love you.” An hour later and she was gone.

Then the funeral with the many friends and family who came to honor her life. All of us in shock. Too young. Not fair. The tentacles of grief grabbing our hearts.

Her children graciously gifted me with the painting. I hung it, amazed by how it accented my creamy yellow wall.

A remembered whisper, “You need that painting.”

True. I needed to give it to Deb for her last birthday, if only for a few weeks’ enjoyment. I need it now to remember her with a smile and treasure our times together.

We all need the reminder to underscore how quickly life can change and how we need to celebrate each other — often and with joy.

The painting cost five bucks, but you were worth much more — so much more.

Hope Shines is dedicated to the memory of Debby Mosher, who lived her life with shining hope.