The tagline for my blog reads, “Finding Hope When Life Unravels.” What an appropriate phrase for the brave people of Shawnee, Carney and Moore, Oklahoma!

Last week, when tornadoes unraveled thousands of lives, reporters from all the major news arteries descended on the Sooner state. Pictures reminded us all to be grateful for the roofs over our heads and the survival of our children.

But what struck me most was the faith walk of the people in my home state. Many of the reports mentioned the solid value system these resilient people possess.

One man emerged from his storm shelter with his video camera and filmed the shattered remains of his home. He spoke the simple phrase from Job, “The Lord giveth and the Lord taketh away.”

Children in one of the grade schools sang “Jesus Loves Me” while their teacher broke protocol and prayed out loud. Good for her. Good for them. 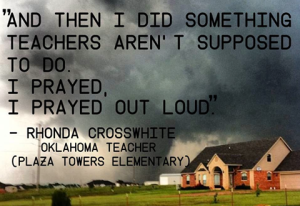 The doctor in charge of the ER and triage at the hospital gave credit to Jesus and God for helping them through a long night of serious injuries and mounting deaths.

A nurse helped deliver a baby whose mother named him Emanuel. “God with us,” said the nurse. “Emanuel.”

And who of us can forget that incredible video of the woman whose dog was discovered during the interview?

The woman stopped to praise God and told the reporter that two prayers were answered – one for her own safety and one for her precious pet.

These stories reminded me of the verse in Psalm 75:1, “Your Name is near and they who invoke Your Name rehearse Your wonders” (Amplified).

These brave folks from the Sooner state rehearsed God’s wonders in front of national television. They weren’t afraid to tell about their faith and praise the God whose power is even greater than an EF-5 twister. Although many of them lost family members and precious children or woke up with bruises and splinters rammed into their flesh – these incredible folks looked right into the cameras and shared their faith.

I have never been so proud to claim my heritage as an Oklahoman.

2 thoughts on “Finding Hope in Oklahoma”