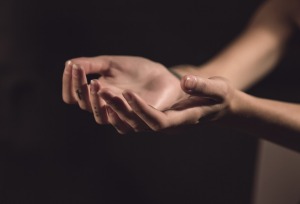 He was a large, muscular man and when he sat down in the bus, the leather seat expelled air. I peeked at him around the pages of the book I was reading as my writer brain started inventing a character sketch.

He’s a construction worker by day, a bartender by night and his feet hurt. It feels really good to sit down for a change. Or … he’s a pastor on his way to the inner city church he serves. The dirty T-shirt is a cover up and helps him relate to the young people in his congregation. Or … he’s an undercover spy and just wants me to think he’s a normal guy.

But then he crossed one leg and I discovered he was far from a normal guy. Tattooed on one leg was the image of a little girl with her name inked above her sweet face, “Kelsey Jane, beloved daughter.”

What kind of guy loves his daughter so much he tattoos her picture on his massive leg? Was she one of those tragic little ones that cancer took away? Her image on his leg was a memorial to her short life?

He saw me staring and before I could disappear behind the pages of my book, he answered my question with vulnerability, “I’m divorced and I don’t get to see her very often. This way, I’m always carrying her with me.”

I swallowed the lump in my throat and said, “That’s the greatest tattoo I’ve ever seen.”

He tipped his Royals baseball cap to me, then turned away. I returned to my book – both of us in our own worlds as people do on mass transit.

I almost wanted to find the nearest tattoo parlor and ask for a picture of my son emblazoned near my heart. Almost.

But I couldn’t forget the image and the question it posed, What kind of guy loves his daughter so much he tattoos her picture on his leg?

Then I remembered another guy who does the same thing – not on his leg, but on his hand – on the tender palm area where he can see it every time he reaches out to help someone.

God Himself cares so much about each of us he has tattooed us on the palms of his powerful hands.

In the original Talmud, the meaning of this tattoo or engraving was of an unbreakable bond, of a love so intense it was comparable to a mother’s love that could never ever forget her child. The Hebrew word also included the provision of God’s care, reaching out to protect his children from harm.

As God’s children, we can depend on that mother love, that unbreakable bond, that caring and loving provision. Always.

I often think about the guy on the bus and hope he’s having some quality time with his daughter. Usually, I remember him when I’m going through a rough patch and need some encouragement.

The tattoo of Kelsey Jane makes me smile, while the visual of my image tattooed on the palm of God’s hand fills me with hope.

18 thoughts on “Hope Wears a Tattoo”