For several years, I have wanted to do this one special thing. Finally this year, I accomplished it.

This feat was not a joyous bucket list fulfillment but rather a moment to honor loss.

On Memorial Day, I clipped a couple of hydrangea blossoms from my container garden, wrapped their stems in a wet paper towel and drove to the cemetery.

No one I know is buried in this particular cemetery, but I am grateful this place exists. For some reason, during this time of recovery, I needed a concrete place to grieve.

It is a Catholic cemetery and bless their hearts – these Catholic sisters and brothers who have provided a special place for grievers like me.

Although I am 36 and 34 years from the losses, somehow the harsh reality never leaves me. Probably because I was not offered the solace of a cemetery plot or the finality of physical closure.

But this cemetery has a special section in their Babyland for mothers like me. One area with flat stones set apart from the other tiny plots of infant and young child deaths.

This area of Babyland – the goal of my mission – lists only one date on a stone and sometimes only the name, “Baby.”

These are the stones that indicate a miscarriage or an abortion – a child not fully formed and never held.

On this Memorial Day, toys were scattered across the stones, flowers, an occasional scribbled note, “We miss you.”

How I wish I would have had the opportunity for a physical closure like this – all those years ago. My stones would have read:

I do not know where the remains of my babies lie. The D&C surgery that took what was left of them never indicated what happened to their tiny bodies. I probably do not want to know exactly what the medical community does to a miscarried baby.

A wall of remembrance lists children by their death years. I run my fingers through the engravings of 1981 and 1983, then sit on a nearby bench – listen to a cardinal’s song, let the sunshine dry my tears.

I ask God to hold my babies close. To tell them how much I still miss them. To remind them they have a younger brother and what a wonderful man Caleb is.

Still holding my flowers, I wonder where to place them. I wish for some music, a plaintive hymn sung by a quartet or even the solemnity of “Taps.”

My flowers somehow do not belong on any of the already designated stones. I would not impose on the memories of another grieving mother.

Then I see it. The iron and brass cross stands as a sentinel in this sacred place. So I 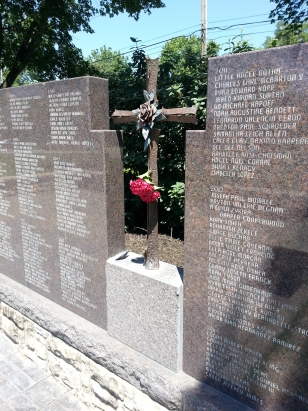 insert my flowers, believing the Savior on the Cross is also brother and protector of my children.

The hope that echoes through a cemetery sings with the assurance that death is NOT the end. Someday it will have no sting. Life eternal will exist as a cherished reality.

For those of us who never held our babies, hope cries out the beauty of that someday when we will meet our little ones face to face.

Somehow – for now – that is enough.

©2017 RJ Thesman, Author of “Sometimes They Forget” and the Reverend G Trilogy