Several people have recently asked, “Why do women wait so long to accuse men of sexual assault?”

Answer # 1: When a young girl is sexually assaulted, she will often dissociate. She will mentally and emotionally leave her body, and the memory of that trauma will hide in her subconscious.

Shock and denial are powerful protectors. She may not remember the event until decades have passed and something triggers the memory – something like the “Me Too” movement.

Answer # 2: Abusers will often whisper, “Don’t tell” or “This is our secret.” If his victim has been raised in a culture of male authority, she will obey the whispered lie rather than speak the truth about what has happened to her.

It takes an enormous amount of courage to confront that lie. The reason we have seen more women speaking out is because strength resides in numbers. Women feel more empowered when they are not alone in their pain.

Answer # 3: Many abusers are particularly skilled at manipulation – sometimes called “Gaslighting.” A gaslighter will convince the victim that she is at fault. So if she tells anyone, she will be punished and condemned. If she speaks her truth, she may lose her job, the respect of her family — even her ministry.

Gaslighters use words such as “She really wanted it” or “She was dressed so provocatively I couldn’t help myself.” When these abusers blame their victims, they don’t have to admit they are criminals. For more information about “gaslighting” check out Leslie Vernick.

Do women sometimes lie about being assaulted? Certainly. But statistics show the majority of the lies come from the abusers.

Why is a blog about HOPE dealing with the subject of sexual assault? Because so 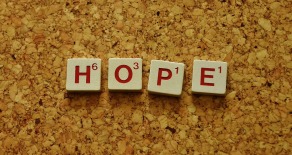 many of us who can answer “Me, too” need to find hope. Some of us suffer from PTSD, from low self-esteem, from the strangle-holds of fear. And we can pinpoint the beginnings of that pain from the moment we were devalued, victimized, assaulted.

The only way to march forward and embrace HOPE is to tell the truth. The sexual assault was NOT our fault, and the numbers of encounters now being reported prove just how depraved mankind is.

This is why we humans so desperately need a Savior. For those of us who have experienced assault and reached out to Jesus – we know he is the one male figure we can totally trust. And in relationship with him, we find ultimate HOPE.

6 thoughts on “Hope Answers the Question”